The demands on a manager’s time are endless and sometimes it feels like you’re being pulled in every direction at once. These demands can make it hard to focus, they make it hard to move from reacting to problems to anticipating them. In this article, I’d like to talk about how I’ve limited demands on my time, counterintuitively doing more with less.

The very first thing I learned as a new manager was that if I didn’t put a block on my calendar at lunchtime, there was no guarantee that I would eat lunch that day. As an engineer, I thought I knew what it meant to take a lot of meetings, but my promotion brought with it a torrent of people who wanted to talk to me and had no consideration for how hungry I was getting.

Several months later, I had another calendar-related discovery. I was traveling to the east coast and 2 hours ahead of the rest of my team. So that work didn’t overlap my east coast dinner time (meals are very important to me), I put a block on my calendar preventing any meetings after 3pm mountain time. Since no one else was scheduling things at 7am, this effectively gave me a 6-hour working day. What I realized at the end of that week was that I had been more productive, despite being available for fewer hours. As soon as I got home, I configured my calendar to show my working hours as 10am to 4pm.

It’s taken me a while to really understand what happened and why it was working. What started to help me put it together was this tweet thread:

Calendar as Kanban board

Kanban is a lean-manufacturing process developed at Toyota and enthusiastically adopted by the software development industry. It’s a process that I am generally pretty fond of, and have found to work well for me in the past. It breaks workflows down into steps and limits the number of items that can accumulate in a single step at any time.

That board looks suspiciously like another grid that is currently running my life: 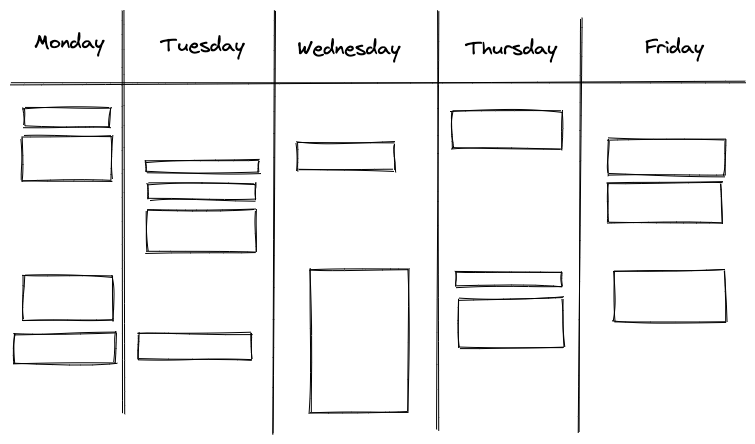 The parallels are uncanny. Instead of workflow steps, I have days of the week, and instead of an arbitrary item limit, I have the hard physical constraint of “number of hours in a day”. By using focus blocks and working hours to limit the available 30-minute intervals in my calendar, I can effectively limit the potential “work in progress” (WIP) aka meeting time.

Why would I want to do that?

The benefits for me are obvious - fewer demands on my time, less work to do, all around a less stressful job. But even beyond that, I’ve found myself to be more productive. Where is that coming from? My answer to that question came from this fantastic thread:

I want to quote the whole thing - because it’s excellent, but the TLDR is that without some amount of slack time in a system, small interruptions quickly snowball into massive delays because there’s no opportunity to catch back up. Think of a traffic jam at rush hour - everyone involved wants to be driving at full speed, but because there’s no space between cars, if one person slows down just a little bit, everyone else also has to.

To make this work, my working hours and lunch blocks are not absolute - they are flexible. When I’m needed on a sales call (a consistent, but unpredictable need) it’s easy to move things around and make time to take it. When a project or one of my reports needs me to be more involved, I have the bandwidth to give them the attention they need. None of that would be possible if every minute of my working day were already accounted for. It would mean reprioritizing on the fly, with hurt feelings when I tell someone they got bumped down on my todo list. Instead, the only hurt feelings are in my stomach, when I wait just a little bit longer for lunch that day.