The only way to perfectly estimate how long a task will take, is to do the task and measure how long it took. In most situations where you’re endeavoring to produce an estimate, this is not a practical way of providing it. At the other end of the spectrum, you can pick a random number and base your timeline on that. While this is a quick and easy way of coming up with an estimate, it is rarely helpful. Between these two extremes is where most of us end up; balancing the tradeoffs between accuracy and impracticality. Story points, and the various ceremonies that surround them, are an attempt at striking that balance.

Software developers often use story points within some variation of agile framework to communicate their estimates to their project managers and fellow teammates. Despite their pervasiveness in the industry, story points have no consistent definition, and there is often ambiguity about what they represent. To make sure we’re all on the same page, I define them as:

A relative measure of the estimated amount of effort required to complete a task.

The word “relative” is doing a lot of work here. A senior developer may complete a task in half the time it takes a junior developer, but this shouldn’t change the estimation of effort. Because of this relativity, story points become most useful in aggregate. There, they are used to describe a team’s velocity - the number of story points a team can be expected to accomplish over a sprint (usually a two week period).

Another word doing a lot of work in that definition is “estimated.” As I mentioned at the start, an estimate will never be perfect and will always carry some level of “uncertainty.” Unfortunately for story points, they are a single number and have no built-in mechanism for conveying that uncertainty. A nod to this drawback is found in the commonly used practice of only assigning story points from values in the Fibonacci sequence. 1, 2, 3, 5, 8, 13, etc. By omitting 4s and 6s, we acknowledge that our estimates are not precise enough to distinguish among the numbers surrounding five.

While acknowledging uncertainty is easy to agree to in theory, it is often forgotten in practice. High point values can become dumping grounds for significant (but well defined) work, and small values can describe the “best-case scenario” of a volatile undertaking. In my own estimating, I try to stick to the agreed-upon precision, and measure my story points as “effort + uncertainty” as follows:

Plotting these point values against my typical velocity looks something like this: 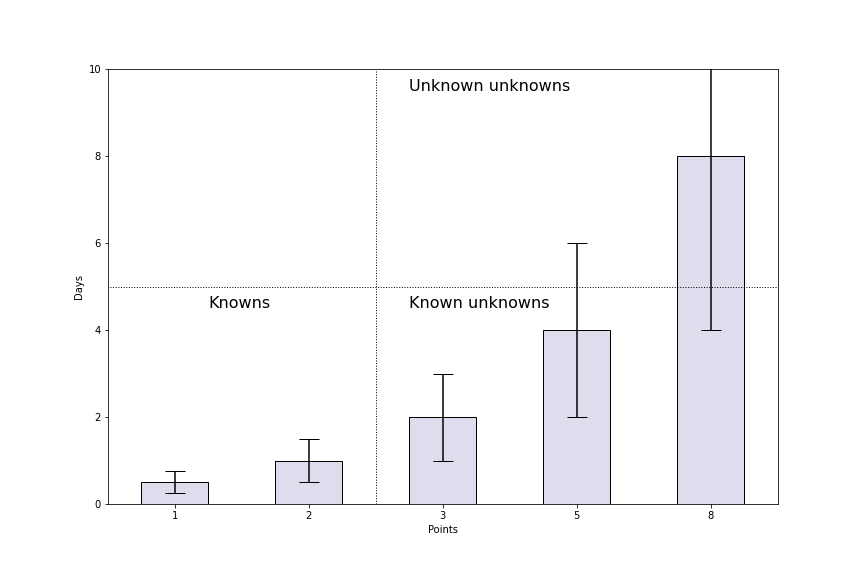 Conveniently, this fits nicely into a four-quadrant graph.

I have found this to be a reliable framework for delivering estimates that are of consistent accuracy. It also provides a useful distinction in meaning between different story point values. A five is not merely a collection of ones. However, to take advantage of this framework requires that the tasks themselves have the appropriate balance of size and uncertainty.

How should we handle a big task full of a bunch of clearly defined work? Break it up. In addition to the new collection of single point tasks aligning themselves more closely with their implied precision, this conveys several other benefits. Namely:

Sometimes I see a task that I know will take one day or one month, but almost definitely not one week. An example would be doing some analysis on a large dataset, right on the cusp of what a single machine can accomplish. If it fits in memory, it will be a straightforward process; I can use the tools with which I am most familiar and iterate rapidly. If it doesn’t, then I need to implement a distributed system. Results will come more slowly, and I’ll need to add managing the computation cluster to my todo list. The solution here is to create a new task - a timeboxed research task to determine which of the two paths I’ll be going down. Once I’ve eliminated one of the two “modes”, I can feel free to estimate the remaining work using more normal probability curves.

What I’ve just described is a tiny slice of what goes into putting together an estimate. I’ve explained my thought process as an individual estimating a single task. In reality, story point estimates are a dialogue with the rest of your team and take in the rest of the project as context. That dialogue is crucial to flush out hidden requirements and ensure that everyone agrees on the task’s entire scope. Finally, one of the most significant benefits of generating and tracking story points is revisiting them once the task is complete. Using past estimates to calibrate future ones is a form of deliberate practice that will inevitably improve your skill over time.